The smile of Thales

A journey into Finance and Computation

A website about uncertainty, convexity in Finance, Computation and algorithmic.

Pretty much like in any Popperian scheme of trial and error, the Interest Rate Swap market has come to a new stage of its history. Since the theatric collapse of Lehman Brothers and other banking institutions the former single-curve framework (conjecture) has been widely rejected (refuted) by the Market. Moreover, the counterparty risk has been taken into account by practitioners and has become part of regulators’ demands.

Taking into account the counterparty risk is not a trivial improvement and leads to a considerable reconditioning of the Swap valuation framework.

Through this article we aim at presenting the new Swap valuation framework and describe the basic market standards. In the first part of the article we will go over the previous Swap pricing framework and will add some complexity  afterwards. In the second part we will dwell on the tenor-based pricing method and extend this first enhancement to the case of standard CSA-Discounting with a  particular focus on counterparty risk. The latter considerations will naturally lead us to a generalization thanks to the Multiple Curves and Cross-Currency Collateral.

Prior to the Credit Crunch, the (legacy) Swap pricing system was pretty simple and mainly consisted in using one Zero Coupon Swap-derived Curve to compute the Forward Rates and to discount the prospective Cash-Flows.

This method was actually consistent with the way each counterpart used to fund the Swap. The traditional method of funding was using the Libor denominated in the Swap Currency (or EURIBOR for Eurozone swaps) plus a spread corresponding to the cost of funding that prevailed. As a result, each counterpart could discount the Cash Flows through a Zero Coupon Swap-derived curve. The second consequence is that we assumed we could use a similar Swap-derived curve to compute the projected forward rates.

Mathematically, it can be translated into the following Interest Rate Swap equation:

Where, R is the Swap Par Rate.

is the year-fraction that prevails between dates

is the discount-factor prevailing at date

(it is usually interpolated off the ZC Curve).

is the Forward Rate computed between dates

As per the standard arbitrage-free assumption derived from a Forward contract, we can re-arrange the Forward Rate calculation into the following equality:

When plugging the previous equality into the Interest Swap equation, we end up with the following equality (assuming we have n period on the floating leg):

We can then determine the Par Swap Rate, R as follows:

We can observe that this method has the obvious advantage to be straightforward and efficient from a computational standpoint. This will be very useful afterwards, when we will have to strip the whole curve out of this very formula.

Prior to the Credit-Crunch crisis we use to have only one and only curve in the more mature swap markets (that is EUR, USD, JPY, GBP, CHF, AUD…). This curve can be seen as a blended curve which was encompassing instruments derived from different Libor tenors.

Discount Factors are directly deduced from the short-term instruments by using the same equation and relationship we showed to compute the Forward Rates earlier, except that the rate is used as an input and that the End Discount Factor as an output. However, it is worth noting that the previous method will not stand for Futures as we need to use a convexity adjustment to account for the potential margin calls and their intrinsic relationship with short-term interest rate volatility.

Swaps are typically stripped tenor after tenor to build the whole curve by using the following algorithm:

From the previous equation we have:

The 2Y Swap Rate (denoted ) is quoted on the OTC Market, and the 1Y Discount Factor is either deduced from the Deposit instruments or interpolated between Deposits and Futures. Therefore the 2Y Discount Factors can be easily calculated:

On the Euro Swap market, the Fixed Leg Year-fraction is typically calculated using the 30/360 Bond Basis convention. The Swap Start Date is following the Today + 2 Business Days conventions, (which is computed by using the Overnight and TomNext Discount Factors beforehand).

More generally speaking each discount factor can be calculated or “stripped” out of the previous ones by following the well-known recurrence:

The only difficulty here lies in computing the Discount-Factors that cannot be directly interpolated. For example on the Euro Swap curve, if we want to compute the 50Y Discount-Factor, we will need the 40Y Discount Factor but also the 41Y DF up to 49Y to account for the Swap Level. The latter can be either interpolated or solved thanks to a Multidimensional solver.

Here is the kind of curve that can be created thanks to the bootstrapping method: 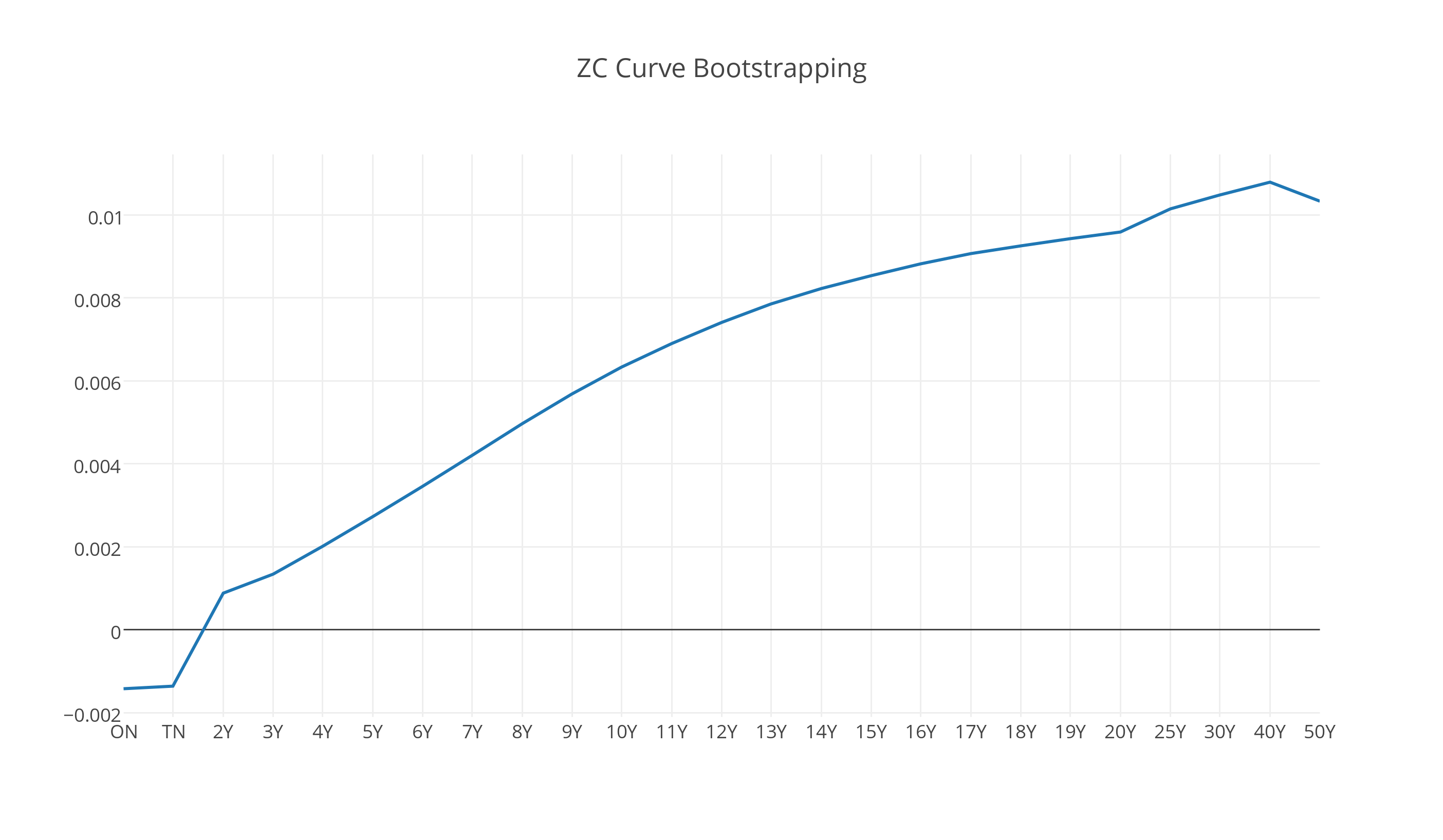